Neon tetra (Paracheirodon innesi) is a freshwater fish of the characin family (family Characidae) of order Characiformes. it is native to blackwater or clearwater streams in southeastern Colombia, eastern Peru, and western Brazil, including the tributaries of the Solimões where the water is between 20 and 26°C (68 and 79°F). See more Neon Tetra 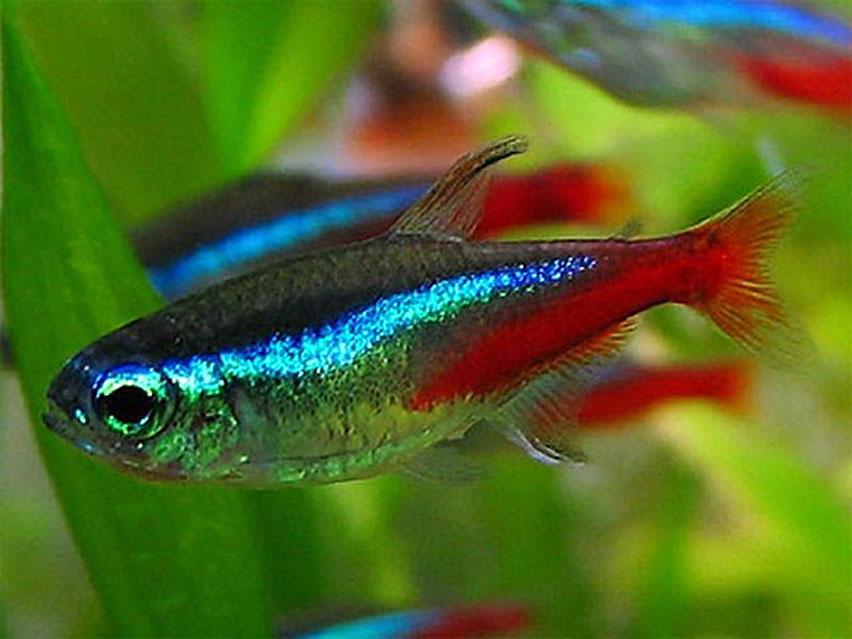 The cardinal tetra, Paracheirodon axelrodi, is a freshwater fish of the characin family (family Characidae) of order Characiformes. It is native to the upper Orinoco and Negro Rivers in South America.

Growing to about 3 cm (1.25 in) total length, the cardinal tetra has the striking iridescent blue line characteristic of the Paracheirodonspecies laterally bisecting the fish, with the body below this line being vivid red in color, hence the name “cardinal tetra”.

The Cardinal Tetra is one of the most desired fish to have in a tank, mainly because of its awesome coloration.

The cardinal tetra’s appearance is similar to that of the closely related neon tetra, with which it is often confused; the neon’s red coloration extends only about halfway to the nose, and the neon’s blue stripe is a less vibrant blue. 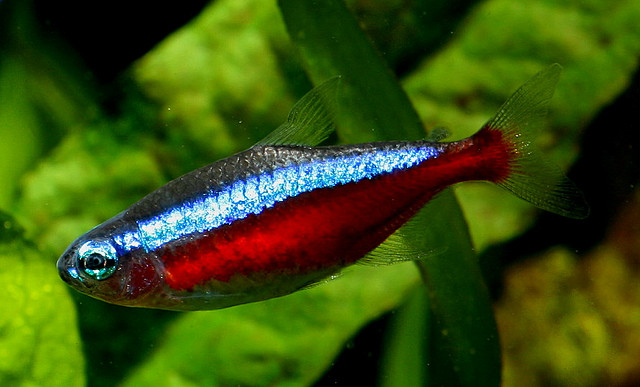 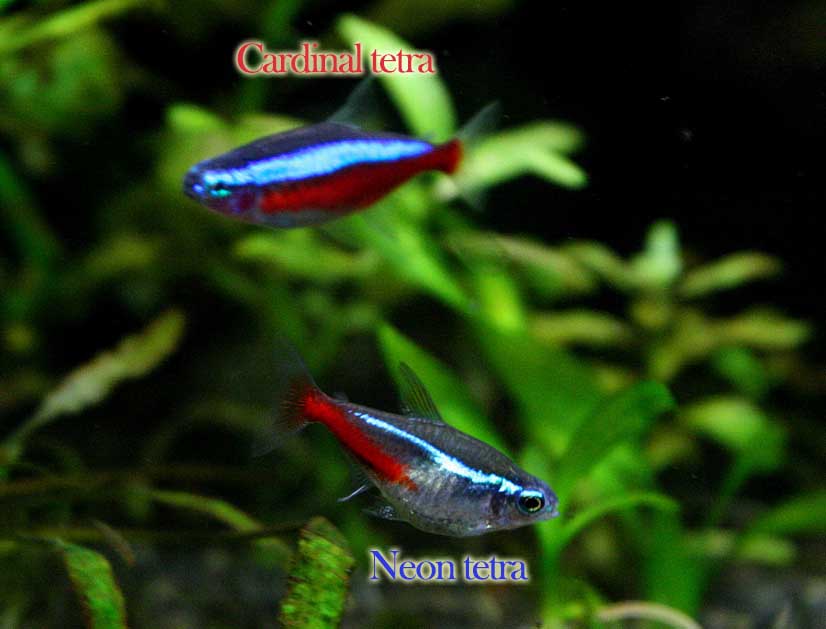 While commercially bred neon tetras have adapted well to a wide range of water conditions, in the wild they inhabit very soft, acidic waters that are usually cooler than the 25°C (77°F) at which most tropical aquaria are maintained. They can have a lifespan of up to ten years, or normally about five in an aquarium. Neon tetras are considered easy to keep in a community aquarium at least 60 cm (24 inches) long, with a pH of 6.0 to 7.8 and a KH of 1.0 to 2.0. 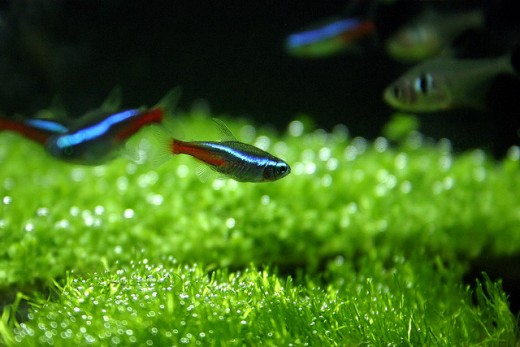 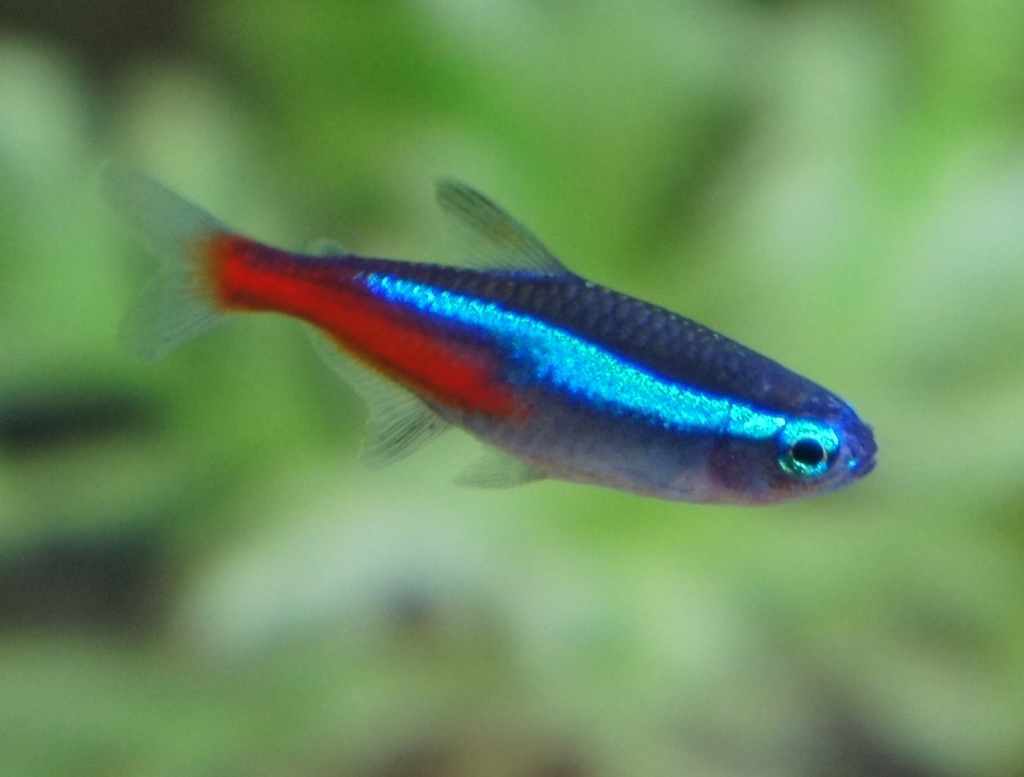 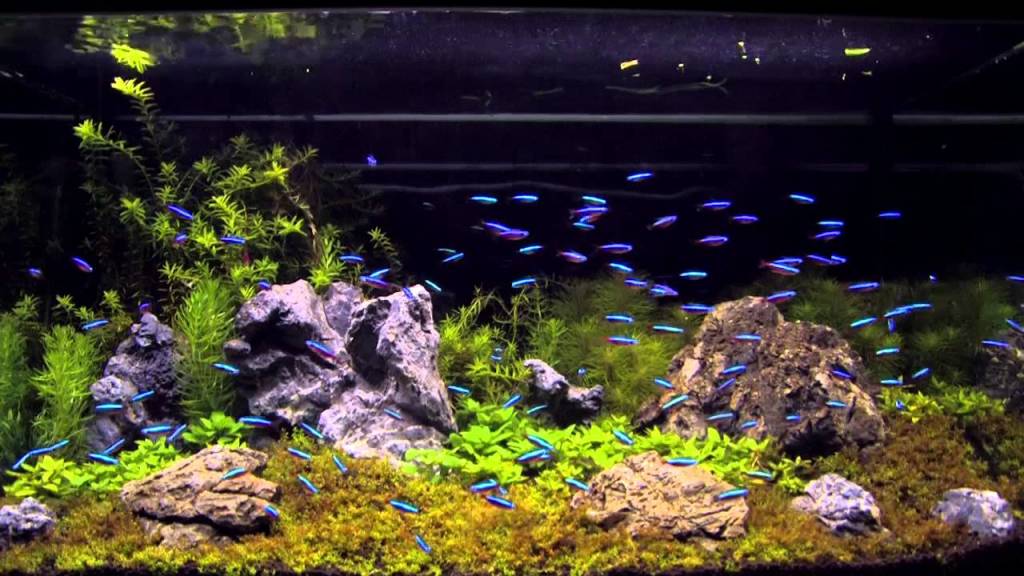 Neon tetras are omnivores and will accept most flake foods, if sufficiently small, but should also have some small foods such as brine shrimp, daphnia, freeze-dried bloodworms, tubifex, which can be stuck to the side of the aquarium, and micropellet food to supplement their diets. A tropical sinking pellet is ideal, as most brands of these include natural color enhancers that bring out the color in neon tetras. Some frozen foods, including frozen blood worms, add variety to their diets.